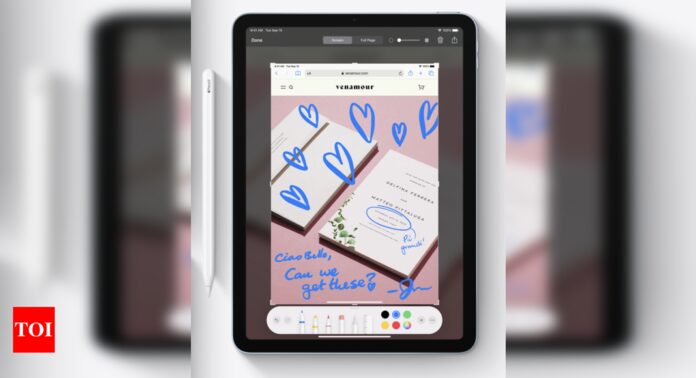 Now that we know that Apple is holding a special event on April 2020, rumours about what could be unveiled are flying thick and fast. While all rumours point to the new iPad Pro almost being a certainty, tipsters have been floating other leaks as well. According to a post on Chinese social networking platform Weibo, Apple could unveil the third-generation Apple Pencil. The leak comes from an account named “Uncle Pan Pan” — who has a hit-and-miss record when it comes to Apple leaks.
Last month another tipster had shared an image of the alleged Apple Pencil 3 on Twitter as well. Apple had last refreshed the Pencil in 2018 when it launched the first-generation iPad Pro. It could be time for the Pencil to get an upgrade along with the iPad.
Speaking of the iPad, the new-generation iPad Pro could be unveiled on April 20 at the Spring Loaded online event Apple is holding.
It has been speculated that the iPad will come an all-new processor. Also, it has been suggested that for the first time Apple will bring mini-LED display tech to the iPad.
A report by Bloomberg stated that even though the iPad Pro might be unveiled, there might be a delay in shipments due to the ongoing global chip shortage.
Another long-rumoured product is the AirTags — a Tile-like tracking device — which could also be unveiled at the event.
Rumours about new models of AirPods have also been doing the rounds. However, there have been contradictory reports around them. Noted Apple analyst Ming-Chi Kuo has said that AirPods will not come in early 2021 but only in the third quarter of the year. But the same leaker who has shared on Weibo about the Apple Pencil mentions that AirPods could also arrive. Take all the rumours with a pinch of salt as we will only get to know when Apple officially unveils the products on April 20.