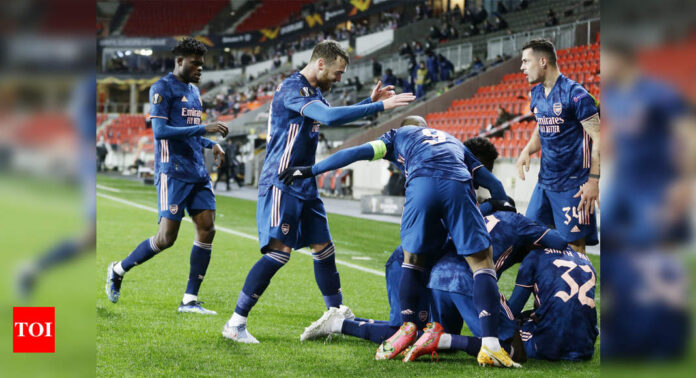 PRAGUE: Arsenal cruised past Slavia Prague 4-0 to book a Europa League semi-final spot on Thursday with three quick-fire goals in seven first-half minutes to advance 5-1 on aggregate.
Alexandre Lacazette struck twice, including a penalty, while Nicolas Pepe and Bukayo Saka also found the net in the quarter-final second leg to set up a last-four clash with Villarreal.
Arsenal, who were surprisingly held to a 1-1 home draw by the Czech champions, signalled their intent from the start as they pressed forward to create chances while Slavia struggled to move the ball out of their own half.

The visitors opened the scoring in the 18th minute when Pepe drove a shot home after a pass from Emile Smith-Rowe, who had a goal disallowed for offside minutes earlier after a VAR review.
Lacazette then coolly slotted home a spot-kick in the 21st minute Czech midfielder had bundled over Saka. Arsenal struck again three minutes later when Saka cut inside his defender and fired a low shot past keeper Ondrej Kolar.

Lacazette netted his second of the night in the 77th minute when he latched onto Pepe’s cross before jinking away from two defenders to create some space to beat the Czech keeper.
Arsenal, who ended Slavia’s 21-match unbeaten streak at home in all competitions this season, face their former manager Unai Emery’s Villarreal in the semi-finals.