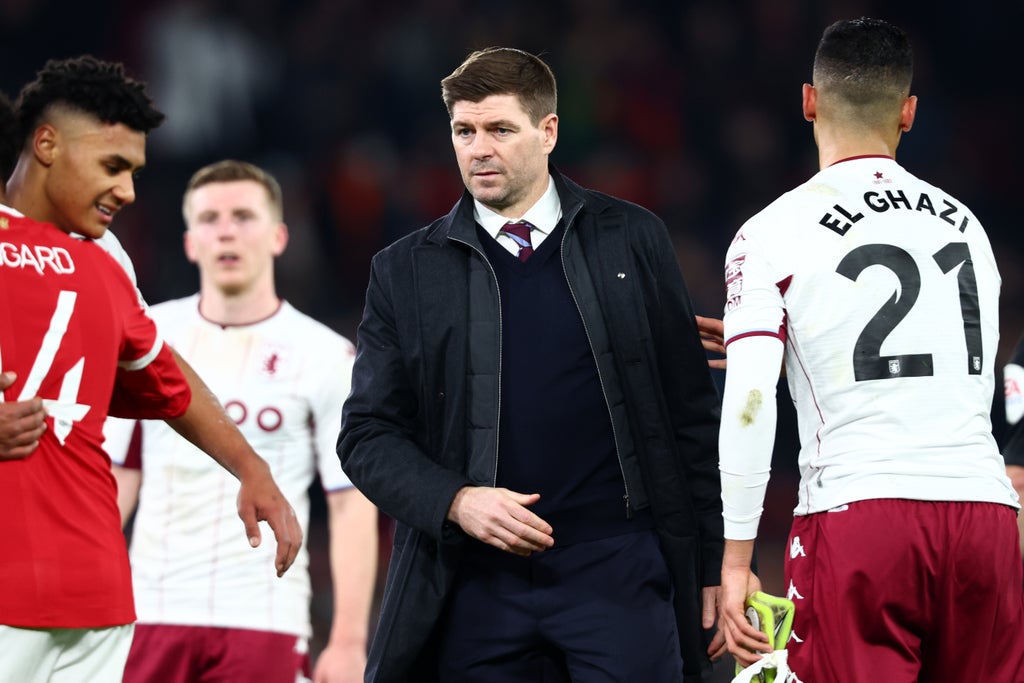 Rangnick on facing Villa twice in a week

Follow for live updates as Manchester United travel to Aston Villa in the Premier League tonight. It’s a revenge mission for Steven Gerrard‘s side as they take on United in for the second time this week. The two teams played one another on Monday in the third round of the FA Cup where Ralf Rangnick’s side knocked Villa out thanks to an early Scott McTominay strike.

Villa could be boosted by the availability of their two big January signings. Philippe Coutinho is expected to start from the bench following his arrival on loan from Barcelona, while Lucas Digne is also in contention two days on from his move from Everton. Gerrard has said he doesn’t want to rush them as he looks for Villa to avenge their FA Cup defeat.

“The only frustration I had the other night is we didn’t progress in the FA Cup, which is important to us,” Gerrard said. “The only way to get the feeling and the mood back that I want is to get a big result tomorrow. It’s a unique situation, playing the same team twice in a short space of time, but it’s also a fantastic opportunity to bounce back. If we can find a similar level of performance, be a little bit more ruthless in the final third and the big calls on the night go in our favour, I’ve got no doubt we can get the result we want.”

Follow all the updates from Aston Villa vs Manchester United below:

Aston Villa have lost 10 of their last 14 competitive fixtures, including the last three in a row. Their total of 21 Premier League home defeats since returning to the top flight in 2019 is the most of any club.

They could go 17 top-flight matches without a draw for the first time since a run of 29 between September 1964 and April 1965.

You would think that after signing the Champions League’s all-time leading goalscorer, a four-time winner with Real Madrid and a 21-year-old prodigy who has played in its knockout stages twice already, Manchester United would be well on their way to achieving a top-four finish by now.

If only it were so simple.

Aston Villa won the reverse league fixture 1-0 and could do the double against Manchester United for the first time since the 1954-5 season. However, Villa’s current winless run of 22 Premier League home games against United is a top-flight record – they’ve drawn seven times and lost 15.

Manchester United were awarded a penalty in each of the last four Premier League meetings. Bruno Fernandes took all four, scoring the first three but missing at Old Trafford last September.

Lucas Digne makes his debut for Aston Villa replaing Matt targett at left-back in the only change for Steven Gerrard’s men. Ollie Watkins, Danny Ings and Emiliano Buendia make up the forward line and Philippe Coutinho settles for a spot on the bench.

Cristiano Ronaldo is once again missing for Manchester United although, Phil Jones, Harry Maguire and Jadon Sancho make the bench. Ralf Rangnick makes three changes to the team that lined-up against Villa on Monday night. Alex Telles is in for the suspended Luke Shaw, Nemanja Matic replaces Scott McTominay and Marcus Rashford is dropped for Anthony Elanga.

Aston Villa can potentially jump up to 10th in the Premier League table if they comfortably beat Manchester United at Villa Park. Steven Gerrard’s men have lost their last three games across all competitions and will be looking to get back to winning ways today.

Manchester United are in need of points if they want to challenge for a top four finish. Last time out in the Premier League they were outplayed at home by Wolves who beat them 1-0 thanks to a late goal scored by Joao Moutinho. It remains United’s only defeat under Ralf Rangnick who keeps finding ways to pick up points despite lacklustre performance’s from his team.

Marcus Rashford is struggling for form having only netted twice in the Premier League this season. He looked short of confidence against Aston Villa on Monday night but Man Utd’s interim boss isn’t too worried about the striker’s form saying:

Aston Villa vs Man Utd: Gerrard on playing United twice in a week

Gerrard’s Villa were the better team on the night but were on the wrong side of the results. Scott McTominay sent United in front but Villa responded well, they had two goals disallowed and Gerrard said:

The Portuguese was left out of Monday night’s FA Cup tie with Villa as a precaution, with Jadon Sancho and Phil Jones also kept at home after picking up minor issues of their own.