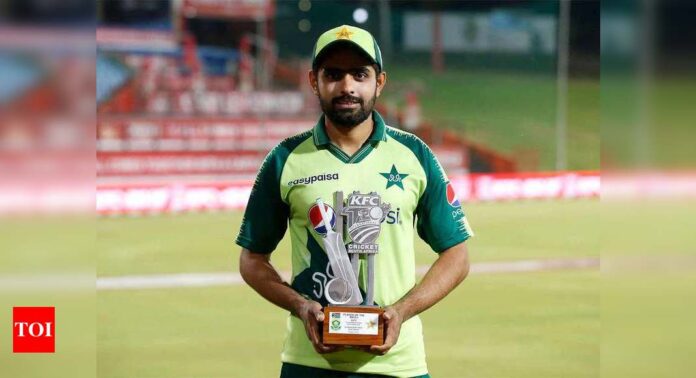 CHENNAI: The last decade has seen international cricket being dominated by the world-class performances of the ‘Fab Four’ of Joe Root, Kane Williamson, Virat Kohli and Steve Smith. This list of modern-day run machines has one more name added to it in the form of Babar Azam.
The 26-year-old from Lahore on Wednesday ended Virat Kohli’s reign as the No. 1 ranked ODI batsman. Kohli has been the top-ranked ODI batsman since Oct 2017. Babar is only the fourth batsman from Pakistan, after Zaheer Abbas, Javed Miandad and Mohammed Yousuf, to have topped the ODI rankings.
Ever since his international debut in 2015, Babar’s stakes have steadily risen on the back of consistent performances. Babar’s elegant stroke-making, his calm demeanour and impressive numbers have won him many fans over the years. From 80 ODIs, Babar has 3808 runs at an impressive average of 56.83.

In T20Is, he has scored 1916 runs at 49.12 from 50 outings. “This is another milestone in my career, which will now require even more hard work and absolute consistency with the bat in order for me to hold on to the ranking for an extended period of time,” said Babar, who achieved the ODI rankings milestone during the ongoing tour of South Africa.
Former Pakistan speedster Shoaib Akhtar believes Babar’s game has evolved over the years and that has brought him a lot of success. “Babar is constantly improving with every game. Be it his strike-rate or the ability to bat for longer periods of time or the levels of fitness, Babar is showing that he belongs to the best in the world,” Akhtar said on his YouTube channel.

Babar, a first cousin of the Akmal brothers, got hooked to the game thanks to those long hours spent in the bylanes of Lahore playing tennis-ball cricket. Azam Siddique, Babar’s father, had a strong influence on him and backed the youngster at every step. His rise was swift in the age-group cricket and by the time Babar was 20 he had made his international debut.
“Babar is someone who is blessed with a lot of talent and has put in a lot of hard work on his game over the years. His records speak for itself. More importantly, a strong family support has shaped Babar into a fine human being,” Ehsan Mani, PCB chairman, told TOI on Thursday.

Mani is clear that Babar won’t be resting on his laurels and will only get better in the coming years. “He is someone who would work even harder to maintain his top rankings in ODIs and look to win more and more matches for Pakistan,” he said.
While his white-ball record can be compared with the best in the business at the moment, there is still work to do when it comes to Test cricket. With just one out of his 5 Test centuries coming outside the sub-continent — 104 against Australia in Brisbane — Babar will definitely want to get better in conditions that test the best. “The ultimate ambition is to lead the Test rankings, which are the real testament and reward to a batsman’s calibre, reputation and skills,” Babar said.