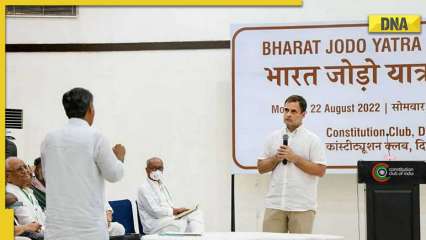 The Bharat Jodo Yatra by the Congress party was launched yesterday, while the foot march by senior leaders began on Thursday morning at 7 am. Meanwhile, Congress leader Rahul Gandhi covered a distance of 20 kilometers on the first day of the padyatra.

Further, the Congress party has also asserted that a “new aggressive avatar” will be presented to the public through the Bharat Jodo Yatra. The party leaders have also asserted that Congress cannot be taken for granted by either friends or political adversaries.

Amid sounds of drum beats, a sea of tricolor, and slogans of “Bharat Jodo”, the march began from Vivekananda College Road, Agasteeswaram here as Gandhi was greeted by locals, who had lined up along the route. The former Congress chief interacted with those waiting to catch a glimpse of him.

Walking briskly, Gandhi, along with several top Congress leaders, covered 13 km in the morning session of the yatra. He walked about seven km in the evening when there was mass mobilisation and thousands walked along with the former Congress chief.

Terming the “Bharat Jodo Yatra” a lifesaver, Congress general secretary in charge of communications Jairam Ramesh said the cross-country grassroots campaign will see the party emerge in a new aggressive avatar that cannot be taken for granted by either friends or political adversaries.

Ramesh slammed the ruling Bharatiya Janata Party (BJP) for its criticism of the yatra. The more the BJP talks about it, the more evident it is that the saffron party is rattled, Ramesh told PTI after the morning session of the yatra.

The Congress’ Bharat Jodo Yatra is set to continue for a span of five months, with the leaders set to cover a 3,570 km distance on the foot march. The padyatra will cover 20 cities across 12 states in India, starting from Kanyakumari and ending in Kashmir.

READ | ‘Kingsway or Rajpath, a symbol of slavery, is now history’: Top quotes by PM Modi at ‘Kartavya Path’ launch