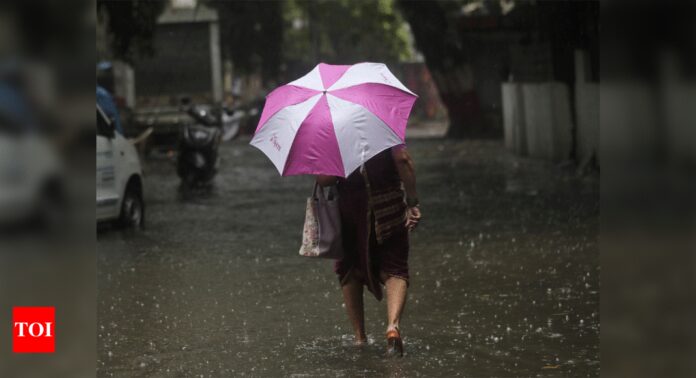 NEW DELHI: Bringing good news for India’s overall economy, the country’s national weather forecaster, India Meteorological Department (IMD), on Friday predicted overall ‘normal’ monsoon rainfall during June-September period across the country. It said the probability of the 2021 monsoon being ‘normal’ was 40% while there was 21% chance of it being ‘above normal’.
“Quantitatively, the monsoon seasonal rainfall is likely to be 98% of the Long Period Average (LPA) with a model error of +/- 5%,” said Madhavan Rajeevan, secretary, ministry of earth sciences (MoES) while making the IMD’s long range forecast for the 2021 southwest monsoon public.
The LPA of the season rainfall over the country as a whole for the period 1961-2010 is 88 cm. The rainfall to an extent of 96-104% of the LPA is considered ‘normal’.
The IMD’s forecast shows that the 2021 monsoon will be the third consecutive year (2019-2021) of good rainfall. India had earlier three consecutive years of rainfall in 1996, 1997 and 1998.

“IMD will issue the updated forecasts in the last week of May. In addition to the update for the April forecast, forecasts for monsoon season (June-September) rainfall for four homogenous regions and forecast for the month of June will also be issued,” said Rajeevan. The IMD will come out with prediction of ‘onset’ of monsoon over Kerala on May 15.
The private weather forecasting agency, Skymet Weather, too had on Tuesday predicted ‘normal’ monsoon this year. It had, however, predicted that the upcoming monsoon was expected to be “healthy normal” to the tune of 103% (with an error margin of +/- 5%) of the LPA. It had said there was 60% probability of the monsoon rainfall to be ‘normal’ this year.
Though the Skymet Weather had completely ruled out the possibility of 2021 being the ‘drought’ year, the IMD’s forecast on Friday mentioned 14% probability of the ‘deficient’ (drought) monsoon.

The IMD has this year adopted the most advanced and comprehensive system to arrive at its forecast, keeping in view demands from different users and government authorities for forecasts of spatial distribution of seasonal rainfall along with the regionally averaged rainfall forecasts for better regional level planning of activities.
For this specific purpose, Office of Climate Research & Services, IMD, Pune has now developed a Multi-Model Ensemble (MME) forecasting system based on coupled global climate models (CGCMs) from different global climate prediction and research centres including the Monsoon Mission CFS (MMCFS) being used by IMD.

“Multi-Model Ensemble (MME) is a universally accepted technique, which is used to improve the skill of forecasts and reduce forecast errors when compared to a single model-based approach. The performance improvements are completely attributed to the collective information of all models used in the MME forecasting system. For the first stage forecast, the existing statistical forecasting system and the new MME based forecasting system are used to generate forecasts,” said M Mohapatra, director general, IMD.
He said, “The MME based forecasting system will also be used in the second stage forecasts in May for generating probabilistic forecasts for the country as a whole and four homogenous regions of India.”
For generating monthly forecasts, IMD will now use a dynamical MME framework instead of present statistical models. Monthly probabilistic forecasts for all four months (June to September) will be prepared during the last week of the previous month using the MME forecasting system.
The forecast of ‘normal’ rainfall is good news for India’s farm sector, driving the rural economy and overall demands. The ‘normal’ rainfall means good acreage of Kharif crops (paddy, pulses, oilseeds and coarse cereals), and adequate water storage in major water bodies across the countries for next crop season. Better water storage helps Rabi (winter sown) crops, bringing the entire crop year in bumper output phase.