All News At Finger Tips – IPL 2022: Pushpa fever grips Obed McCoy as he celebrates in Allu Arjun's style after taking a wicket, Watch! 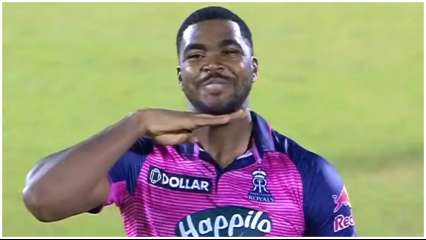 Rajasthan Royals pacer Obed McCoy on Monday came into the limelight after he did the signature step of Telugu actor Allu Arjun’s movie, Pushpa, to celebrate with his maiden Indian Premier League (IPL) wicket. McCoy achieved his first wicket in the clash against Kolkata Knight Riders on Monday after the West Indies-based pacer dismissed wicketkeeper-batter Sheldon Jackon in the 20th over at the Brabourne Stadium, Mumbai.

The pacer celebrated his wicket by doing the famous ‘jhukega nahi’ step from the movie Pushpa and caught all the attention of the audience. Watch the video below!

This was not the first time that any cricketer imitated the famous hook step. Earlier, India all-rounder Ravindra Jadeja also celebrated his wicket in the same manner in a T20I match against Sri Lanka.

Coming to Monday’s match, Jos Buttler`s 103-run knock, his second of the season, and Yuzvendra Chahal’s five-wicket haul which also included a hat-trick powered Rajasthan Royals to a thrilling seven-run win against Kolkata Knight Riders here at the Brabourne Stadium.

READ: IPL 2022 Live Streaming: When and where to watch Royal Challengers Bangalore vs Lucknow Super Giants match in India

Ravichandran Ashwin took only one wicket but he got the prized scalp of dangerous Andre Russell leg before wicket for a golden duck. Obed McCoy bowled the final over of the match with KKR needing 11 runs with two wickets in hand but the left-arm pacer dismissed Sheldon Jackson and Umesh Yadav to guide Rajasthan to the fourth win of the season.