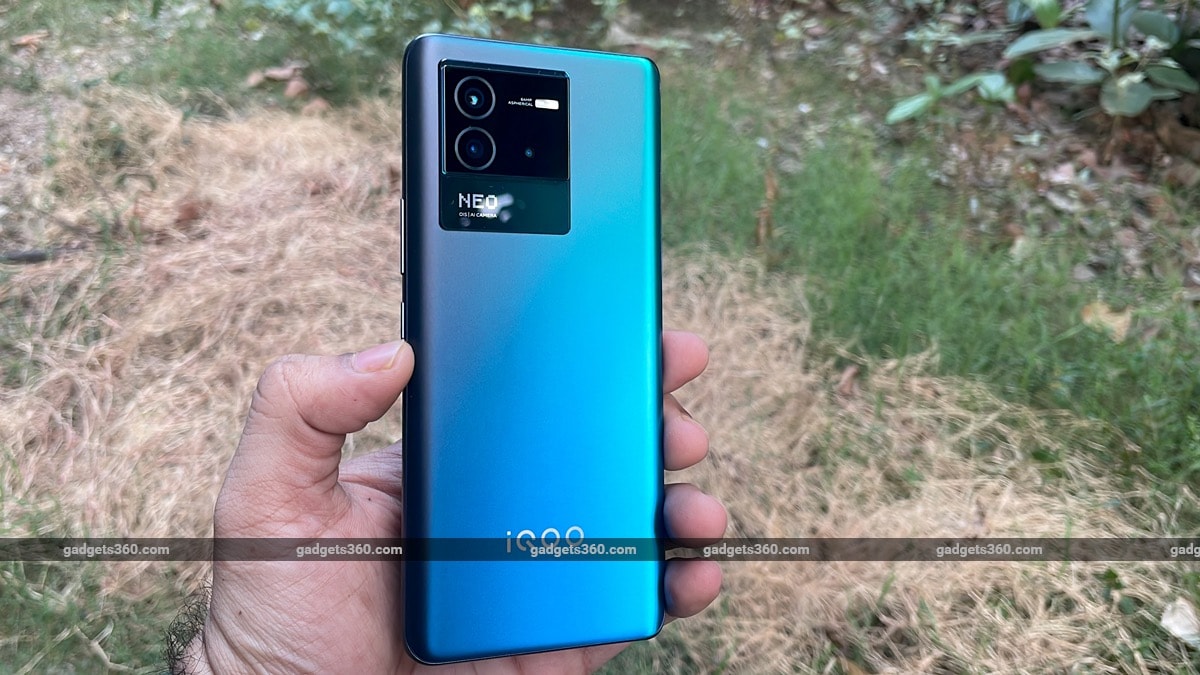 iQoo has brought its Neo series to India with the launch of the Neo 6 in the super-competitive sub-Rs. 30,000 price segment. In order to give the phone a fighting chance, iQoo has equipped it with powerful hardware such as the Qualcomm Snapdragon 870 SoC, and has bolstered its features by giving it 80W fast charging and a 120Hz AMOLED display. The charging speed especially is a lot higher than what you generally get in this price range. But does this make the iQoo Neo 6 undefeatable? My first impressions of this phone has been pretty positive, and now it’s time to see if it’s actually as good as it looks.

The iQoo Neo 6 is a rebranded iQoo Neo 6 SE which launched in China earlier this year. The Neo 6 is a big smartphone and weighs 190g. It sports a 6.62-inch AMOLED display with a hole-punch at the top for the selfie camera. It has fairly thin bezels all around. The frame of the phone is made out of plastic and is flattened at the top and the bottom.

iQoo has added an IR (infrared) emitter on the Neo 6, that sits on the top next to the secondary microphone. The bottom of the frame has the USB Type-C port, speaker, and the SIM tray slot. The back panel is also made out of plastic and has curved sides, which makes the phone comfortable to hold. The right side of the frame is narrow and features slim power and volume buttons.

This Dark Nova colour of the iQoo Neo 6 looks classy

The Dark Nova trim of the iQoo Neo 6 looks classy, in my opinion. It has a gradient finish with mixed hues of dark blue and bright teal. This latter shade shines through when light hits it at certain angles. If you prefer something more flashy, the Cyber Rage colour might be to your liking. The camera module on the iQoo Neo 6 will also grab your attention. It has a two-step design with a prominent Neo branding on it.

iQoo ships the Neo 6 with a transparent case in the box. The back panel of the phone does have a matte finish, so fingerprints aren’t really an issue but the case should provide some added protection. You also get a USB Type-C to 3.5mm audio adapter, which is a good addition.

The iQoo Neo 6 is powered by the Qualcomm Snapdragon 870 SoC which is one of the most powerful SoCs in this price range. The Mi 11X (Review) which directly competes with this phone, is also powered by the same SoC. iQoo says it has used a liquid cooling system to keep the SoC running cool.

The Neo 6 sports a full-HD+ E4 AMOLED display with a 120Hz refresh rate. It has a 360Hz touch sampling rate which can boost up to 1,200Hz in a few games. The panel is also HDR10+ certified and has a brightness of 800 nits. iQoo has also added stereo speakers to the Neo 6 but it misses out on an IP rating.

The phone supports Bluetooth 5.2, dual-band Wi-Fi, four 5G bands, dual-4G VoLTE, and five satellite navigation systems. There is no NFC. The iQoo Neo 6 packs a 4,700mAh battery and has support for up to 80W fast charging. iQoo also bundles a compatible charger in the box.

On the software side, the iQoo Neo 6 runs Funtouch OS 12 on top of Android 12. iQoo promises two years of Android OS updates and three years of security updates. The user interface is nearly identical to the Vivo X80 that I recently reviewed since both use Funtouch OS 12. Sadly, I faced the same issue with bloatware like I did on the Vivo X80, as there’s simply too much of it. You can uninstall most of these apps to reclaim some storage space. On the iQoo Neo 6, I found that the browser app pushed unwanted notifications throughout the day, which got annoying very quickly.

The iQoo Neo 6 uses a powerful SoC and delivers consistent performance without any signs of slowing down. I had the 12GB variant which comfortably allowed me to multitask without needing to kill any opened apps in the background. I could switch between different apps and games, and I never noticed the phone having to reload an app. iQoo also has an extended RAM feature that allowed me to allocate 4GB of system storage as virtual RAM.

Watching videos on the iQoo Neo 6 felt engaging on the crisp AMOLED display. The stereo speakers also added to the viewing experience. The higher refresh rate made scrolling in apps and menus much smoother. iQoo has set the refresh rate to Smart Switch by default and with this setting, the Neo 6 ran at 120Hz most of the time.

The iQoo Neo 6 has an in-display fingerprint scanner, which was reliable and never failed to unlock the device whenever I tried. I had also set up face recognition which worked equally well. The phone fared well in benchmarks. It managed 729,331 points in AnTuTu which was higher than the OnePlus Nord 2 (Review). In Geekbench 5, the Neo 6 scored 983 and 3074 points in single-core and multi-core tests. In the GFXBench graphics benchmark, the iQoo Neo 6 managed 50fps in the Car Chase test. Overall, the scores were on the higher side in this segment so those looking for good performance should be pleased.

I played Call of Duty: Mobile on the iQoo Neo 6 which defaulted to the ‘Very High’ graphics preset, while the frame rate was set to ‘High’ by default. I played the game for about 20 minutes which resulted in a five percent drain in battery level. The phone wasn’t warm to the touch which could be the result of the liquid cooling system doing its job.

I was happy with the battery performance on the iQoo Neo 6 as the phone easily lasted for beyond a day and a half without any issues. In our HD video loop test, the phone ran for 21 hours, 17 minutes which was impressive. The supplied 80W charger managed to charge the phone up to 83 percent in 30 minutes and was charged completely in under 50 minutes.

The iQoo Neo 6 sports a triple camera setup consisting of a 64-megapixel primary with OIS, an 8-megapixel ultra-wide with a 116-degree field of view, and a 2-megapixel macro. For selfies, it has a 16-megapixel camera. The camera app is fairly easy to use and is visually similar to the app on the Vivo X80, minus the Zeiss additions. The main camera pixel-bins photos to 16-megapixels by default, but you can shoot at the full resolution if needed.

Daylight landscape photos from the primary camera were detailed and objects at a distance were recognisable. Text on distant buildings were also legible. The phone has an AI scene optimisation option which occasionally bumps up the contrast in the output. The ultra-wide-angle camera offers a wider field of view and has a similar colour profile as the primary camera. However, the output was warped along the edges of the frame.

Close-up photos looked crisp and the iQoo Neo 6 managed to capture minute details quite well. It also managed a soft, natural bokeh between the subject and the background. Shots taken in Portrait mode had good edge detection. The macro camera managed good extreme close-ups of subjects. However, the quality was limited by the resolution of the sensor.

The iQoo Neo 6 was quick to gauge the scene in low light and automatically kept the shutter open for longer. This resulted in a fairly detailed image. The phone also prompted me to switch to Night mode in very dark scenarios, which looked brighter and produced better details in the shadows.

Selfies taken with the iQoo Neo 6 were captured at the sensor’s full resolution. The app applies a beautification filter by default but this can be adjusted or even disabled if needed. Daylight photos had accurate skin tones. In low light, the phone enabled screen flash automatically which helped in getting a better output. Selfie’s taken in Portrait mode had good edge detection and I could fine tune the level of background blur before capturing the image.

Video recording topped out at 4K 60fps for the primary rear camera, as well as the selfie camera which is not something we see very often. Video footage was well stabilised in daylight, but low light footage had visible shimmer in the output when walking. The camera app also has a dual-video mode that allowed me to shoot using the primary and the selfie camera at the same time.

If you are looking to buy a smartphone with a budget of around Rs. 30,000, the iQoo Neo 6 should definitely be high up on your list. It has very good performance that you would expect from a high-end Qualcomm SoC, along with excellent battery life and extremely fast charging. The promise of guaranteed Android OS and security updates make the iQoo Neo 6 future-proof to an extent. In my opinion, the base variant of the iQoo Neo 6 is the one to get since it offers better value than the 12GB variant.

I don’t have major complaints with the iQoo Neo 6 except for the preinstalled bloatware, which is definitely a concern. Those looking for good video recording performance should note that the iQoo Neo 6 doesn’t fare well when shooting videos in low light.

If you value clean software, then the recently launched Motorola Edge 30 (Review) is something you should consider. However, if you don’t want to compromise on performance, then the Mi 11X (Review) and the OnePlus Nord 2 (Review) are very good alternatives to look at in the same price range.