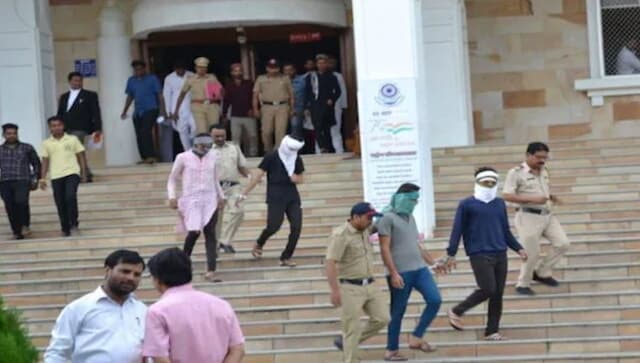 ‘Five persons have been arrested in connection with the murder of the chemist and a search is on to trace the prime accused Irfan Khan (32), who runs an NGO,’ Amravati commissioner of police Dr Aarti Singh said

The accused in the Amravati murder case. News18

New Delhi: The Ministry of Home Affairs on Saturday ordered a probe by the National Investigation Agency into the killing of a chemist in Maharashtra’s Amravati.

54-year-old Umesh Kohle was hacked to death on 21 June, almost a week before tailor Kanhaiya Lal was beheaded by two men Mohammed Riyaz Akhtar and Mohammed Ghous in Rajasthan’s Udaipur.

In both the murders, the victims allegedly shared social posts in support of BJP’s suspended spokesperson Nupur Sharma.

MHA has handed over the investigation of the case relating to the barbaric killing of Shri Umesh Kolhe in Amravati Maharashtra on 21st June to NIA.

The conspiracy behind the killing, involvement of organisations and international linkages would be thoroughly investigated.

Earlier, the counter-terror agency started probing the Udaipur killing on the orders of the Home Ministry.

“Five persons have been arrested in connection with the murder of the chemist and a search is on to trace the prime accused Irfan Khan (32), who runs an NGO,” Amravati commissioner of police Dr Aarti Singh said.

“Kolhe ran a medical store in Amravati city. He had allegedly shared a post on some WhatsApp groups in support of Nupur Sharma for her comments. He even mistakenly shared the post in a WhatsApp group in which some Muslims were also members, including his customers,” an official of the City Kotwali police station said.

After that, Irfan Khan hatched a conspiracy to eliminate Kolhe and roped in five persons for it. He promised to give Rs 10,000 to them and a safe escape in a car, he said.

The incident occurred between 10 pm and 10.30 pm on 21 June when Kolhe was going home on a two-wheeler after closing his shop, he said, adding that his son Sanket (27) and wife Vaishnavi were accompanying him in a different vehicle.

“When all of them reached near Mahila College’s gate, two motorcycle-borne men came from behind and blocked Kolhe’s path. A youth alighted from the motorcycle and stabbed Kolhe on his neck with a sharp weapon and escaped from the spot. Kolhe collapsed on the road in a pool of blood. Sanket rushed him to a hospital, where he died,” the official said.

#WATCH | My brother forwarded some messages about Nupur Sharma in some Whatsapp groups but we’re not able to understand why was he killed because of 2-4 forwarded messages? He didn’t forward them to anyone individually: Mahesh Kolhe, brother of Umesh Kolhe who was murdered pic.twitter.com/njk8X7IGnF

Based on Sanket’s complaint, an FIR was registered and five persons, identified as Muddsir Ahemad (22), Shahrukh Pathan (25), Abdul Thoufique (24) Shoaib Khan (22) and Atib Rashid (22), all residents of Amravati and daily wage workers, have been arrested.