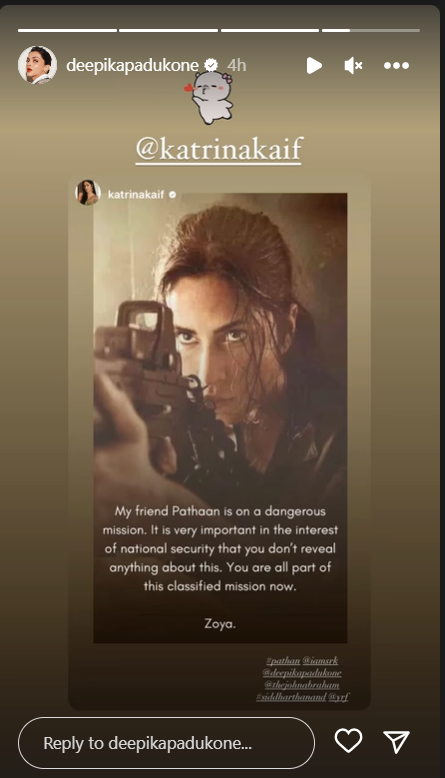 Katrina Kaif aka Zoya shared a photo of herself from her film franchise Tiger and wrote, “My friend Pathaan is on a dangerous mission. It is very important in the interest of national security that you don’t reveal anything about this. You are all part of this classified mission now. Zoya.” Deepika Padukone reshared the story and added a kissing teddy bear gif.


For the unversed, the audience will get to see Bollywood’s two biggest superstars Shah Rukh Khan and Salman Khan together in the same cinema halls as the teaser of Salman’s upcoming film, Kisi Ka Bhai Kisi Ki Jaan will be patched with SRK’s Pathaan in theatres across the country on January 25 and will later be available on YouTube and other digital platforms.

The makers have planned a unique approach for the unit launch which is theatres first, the motion units will be first launched on big screens in the theatres followed by digital. Sharing a still from the movie, Salman tweeted about the teaser release of Kisi Ka Bhai Kisi Ki Jaan with Pathaan shows.