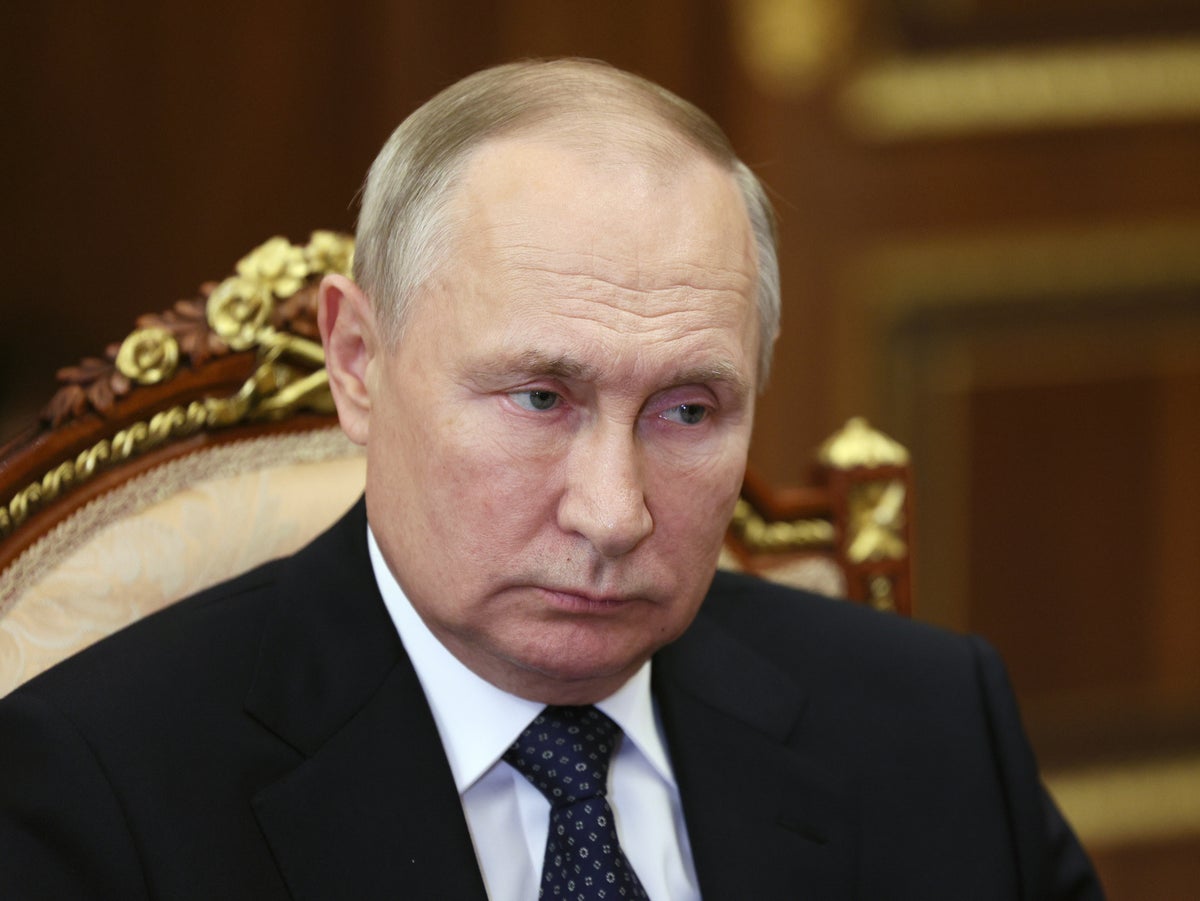 Volodymyr Zelensky hit out against Russia’s “formula of terror” after Ukraine was battered with over 70 missiles in just one day.

The Ukrainian president appealed to the United Nations to take action against Vladimir Putin’s strategy of wiping out vital energy infrustaructure, leaving Ukrainians freezing and without power this winter.

“Today is just one day but we have received 70 missiles. That’s the Russian formula of terror,” Zelensky said via video link to the council chamber in New York.

Hospitals, schools, transport infrastructure and residential areas had also all been hit by Russian strikes.

Ukraine is waiting to see “a very firm reaction” to Wednesday’s air strikes from the world, he added, also calling for Russia to be denied a vote on any decision concerning its actions.

It comes as American officials fear that Putin may use chemical weapons in the war if his losses on the frontline continue to pile up, anonymous sources from the US defence department told Politico.

“Today is just one day but we have received 70 missiles. That’s the Russian formula of terror,” Zelensky said via video link to the council chamber in New York.

Hospitals, schools, transport infrastructure and residential areas had also all been hit by Russian strikes.

Ukraine is waiting to see “a very firm reaction” to Wednesday’s air strikes from the world, he added, also calling for Russia to be denied a vote on any decision concerning its actions.

The European Union is pressing ahead with a ninth sanctions package on Russia in response to Moscow’s attack on Ukraine, European Commission chief Ursula von der Leyen said during a visit to Finland on Thursday.

“We are working hard to hit Russia where it hurts to blunt even further its capacity to wage war on Ukraine and I can announce today that we are working full speed on a 9th sanctions package,” von der Leyen told a news conference.

“And I’m confident that we will very soon approve a global price cap on Russian oil with the G7 and other major partners. We will not rest until Ukraine has prevailed over Putin and his unlawful and barbaric war,” she said.

In a briefing about the situation in Poland amid the war in Ukraine, western officials said Polish politicians think the stray missile strike that killed two people last week is likely to happen again.

The Polish government handled the situation in a “calm” manner but the incident flagged that if it was “badly handled, it could escalate in a different way,” the official said.

“If it happens again- and Polish politicians think it will- they need to manage it in a way that is not unhelpful.”

The European Union is pressing ahead with a ninth sanctions package on Russia in response to Moscow’s attack on Ukraine, European Commission chief Ursula von der Leyen said during a visit to Finland on Thursday.

Power was gradually being restored to Ukrainian cities including the capital Kyiv on Thursday, a day after Russian missile strikes caused Kyiv’s biggest outages in nine months of war.

Regional authorities said 25 per cent of homes in Kyiv was still without electricity but the water supply had been restored in some areas and would start working in other areas later on Thursday.

In a big improvement from Wednesday, when authorities said power was lost across the entire Kyiv region, public transport was operating in the capital, with buses replacing trams to save power.

“Let’s persevere, despite everything” the Kyiv regional military administration said in a statement.

Russian deputy foreign minister Sergei Ryabkov said on Thursday that contacts with the UN nuclear watchdog over safety at the Russian-controlled Zaporizhzhia nuclear plant in Ukraine were “constructive” and showed some promise.

The Zaporizhzhia plant, which Russia seized shortly after the invasion, was again rocked by shelling last weekend, prompting renewed calls from the International Atomic Energy Agency (IAEA) to create a protection zone around it to prevent a nuclear disaster.

The head of the UN nuclear watchdog met a Russian delegation in Istanbul on Wednesday to discuss safety at the plant, which both Ukraine and Moscow have accused each other of shelling.

European Union governments failed to reach a deal on Wednesday at what level to cap prices for Russian sea-borne oil under the Group of Seven nations (G7) scheme and will resume talks on Thursday evening or on Friday, EU diplomats said.

Earlier on Thursday representatives of the EU’s 27 governments met in Brussels to discuss a G7 proposal to set the price cap in the range of $65-$70 per barrel, but the level proved too low for some and too high for others.

“There are still differences on the price cap level. We need to proceed bilaterally,” one EU diplomat said. “The next meeting of ambassadors of EU countries will be either tomorrow evening or on Friday,” the diplomat said.

The G7, including the United States, as well as the whole of the European Union and Australia, are slated to implement the price cap on sea-borne exports of Russian oil on Dec. 5.

The move is part of sanctions intended to slash Moscow’s revenue from its oil exports so it has less money to finance its invasion of Ukraine.

But the level of the price cap level is a contentious issue – Poland, Lithuania and Estonia believe the $65-$70 per barrel would leave Russia with too high a profit, since production costs are around $20 per barrel.

Cyprus, Greece and Malta – countries with big shipping industries that stand to lose the most if Russian oil cargos are obstructed – think the cap is too low and demand compensation for the loss of business or more time to adjust.

In a 494-58 vote with 48 abstentions, the EU legislature sought to increase pressure on Moscow to bring anyone responsible for war crimes committed from the start of the invasion before an international court.

The 27-nation bloc has condemned in the harshest terms the invasion and repeatedly said that several Russian actions over the past 10 months have amounted to war crimes.

Ukraine expects three nuclear power plants that were switched off because of Russian missile strikes on Wednesday will be operating again by Thursday evening, energy minister German Galushchenko said.

“We expect that by evening the nuclear power plants will start working, providing energy to the network, and this will significantly reduce the (energy) deficit,” he said in comments broadcast on national television.

More than two thirds of the Ukrainian capital was still without power on Thursday morning and a swathe of residents had no running water, a day after Russian missile strikes caused Kyiv’s biggest outages in nine months of war.

The capital was one of the main targets of the latest wave of attacks on energy facilities that cut power in many regions and made emergency blackouts necessary in others to conserve energy and enable repairs as winter sets in.

The temperature plunged below zero degrees Celsius overnight in a city that had 2.8 million residents before the war and where it is already snowing and the streets are icy.

Kyiv Mayor Vitali Klitschko said electricians and repair workers were doing everything to get the power back on “as fast as possible” but the recovery would depend largely on the overall energy “balance” of the nationwide grid.

In the south, Mykolaiv region governor Vitali Kim appealed to Ukrainians to be as frugal as possible in their use of power.

“Consumption has been growing this morning (which is logical), there isn’t enough capacity in the system to switch it on for more consumers!!,” he wrote on the Telegram messaging app.

“The energy system is united like we all are! If you’ve turned off a few unneeded lights, that’s really important!!!” 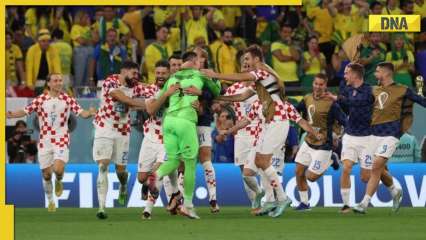