All News At Finger Tips – RR vs GT: 'Retired out 2.0' Netizens in disbelief as Ravichandran Ashwin comes out to bat at number 3

Home SPORTS RR vs GT: ‘Retired out 2.0’ Netizens in disbelief as Ravichandran Ashwin... 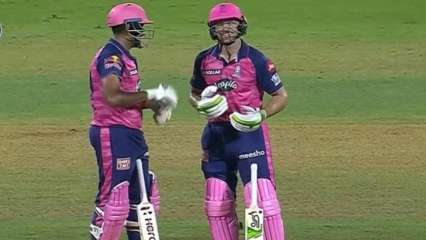 R Ashwin came out to bat at no. 3 for RR

Ravichandran Ashwin is a cricketer in his own league. From Mankading Jos Buttler to becoming the first player in IPL history to get ‘retired out’, Ashwin has the ability to get the netizens talking. The veteran Indian spinner was at it again, on Thursday as Rajasthan Royals (RR) squared off against Gujarat Titans (GT) at the DY Patil Stadium in Navi Mumbai.

After having won the toss, RR skipper Sanju Samson chose to bowl first. Having been sent out to bat, Gujarat batters responded by scoring 192/4 in their respective 20 overs, thanks to incredible batting from skipper Hardik Pandya (87 off 52), Abhinav Manohar (43 off 28) and later, David Miller joined the party, scoring 31 off 14 balls.

Chasing a huge total of 193 runs, Rajasthan Royals got off to a decent start as Jos Buttler began on the front foot, continuing his onslaught on bowlers. Although, once Devdutt Padikkal was dismissed by the debutant, Yash Dayal, fans were shocked to see Ravichandran Ashwin walking out to bat at number 3 for the Royals.

While Ashwin did play an important knock in the previous game against Lucknow Super Giants, when he grabbed eyeballs with his ‘retired out’ tactic, the veteran Indian spinner was sent out to bat against Gujarat with the likes of Sanju Samson and others waiting in the wings.

Seeing Ashwin join Buttler in the middle, netizens started to tweet about ‘retired out 2.0’, although, before Ashwin could have retired out himself for a second game running, his inning was cut short by Lockie Ferguson who dismissed the Indian all-rounder.

Nonetheless, Twitterati were in disbelief to see Ashwin and Rajasthan Royals make such a bold move, and before getting out on 8 runs, the 35-year-old did smack Ravi Bishnoi for a huge six, which was another major talking point for the netizens.

Here’s how Ashwin’s antics against GT got the netizens talking:

It would be interesting to see if R Ashwin plays a little cameo and decides to retire himself out again! #IPL2022
— Akash Ghosh (@Akash_Ghosh_) April 14, 2022

Ashwin did his job, hit Rashid for a six

While the move to promote Ravi Ashwin may have backfired on the day, particularly with the team chasing a huge total, Sanju Samson himself came out to bat after Ashwin’s wicket, but he too couldn’t make an impression as he was run out by Hardik Pandya after having scored just 11 runs.