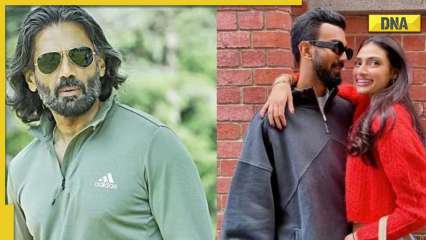 Bollywood actor Suniel Shetty has confirmed the news of star couple Athiya and KL Rahul’s wedding and disclosed that he is seeking for dates.

Athiya Shetty, the daughter of actor Suniel Shetty and his wife Mana Shetty, has made waves for her reported marriage to Indian cricketer KL Rahul. The actress made her acting debut in the film ‘Hero,’ and she is currently in relationship with KL Rahul.

Athiya and Rahul never miss an opportunity to display their affection for one another, as evidenced by their separate social media handles. Rumors about Athiya Shetty and KL Rahul getting married in January 2023 have been circulating for a few days, and now actor Suniel Shetty has reacted to the news and stated that Athiya’s wedding will take place soon.

Speaking to ‘Hindustan Times’, sunil said, “I am looking at the possible dates. We are figuring things out with both schedules. Hopefully, soon we will know when and where it will happen.

There have been several rumours that Athiya and KL Rahul will marry in January 2023. It was also claimed that the wedding would be held at Sunil Shetty’s luxury Khandala house ‘Jahan.’

According to a source close to the couple, “KL Rahul and Athiya will marry in January.” They were lately at the Khandala bungalow. While the specific date is unknown, it will take place in January.” And the duo is planning a traditional wedding. The bride and groom have decided on the attire they will wear on their wedding day.  According to the report, their wedding would be star-studded, with well-known figures from both B-town and the cricket world in attendance to bless the couple.