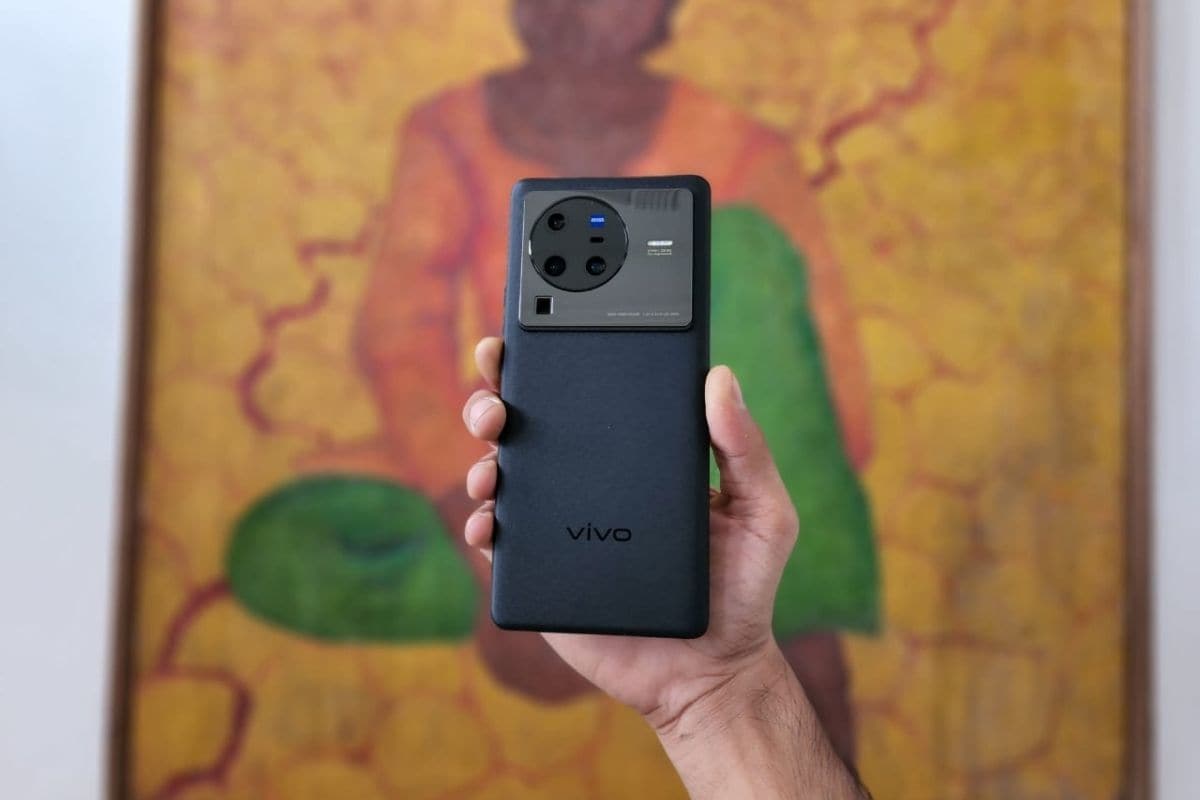 Vivo’s latest flagship, the Vivo X80 Pro looks different from the get go. The huge camera module that dominates the upper half of the back panel with Zeiss branding and four shooters gives the smartphone its distinct look among Android flagships. Vivo has launched the Vivo X80 Pro in India at a price of Rs 79,999 onwards, and the smartphone will go on sale starting May 25 via Flipkart, Vivo website, and other offline retailers.

The Vivo X80 Pro comes with flagship specs and a major focus on the camera, which, as mentioned, is quite evident from the moment you set eyes on the smartphone. There are a bunch of camera features including those that we haven’t seen on any smartphones before, and the Vivo X80 Pro is also a pretty solid performer as a standard Android flagship.

I used the Vivo X80 Pro for a few days, and tested its camera in many different environments, while doing other tasks like playing games, browsing social media, and watching videos on the smartphone. In this article, I will tell you what I like about the Vivo X80 Pro, what I don’t like and if you should consider spending Rs 79,999 on the Vivo X80 Pro.

In terms of design, the Vivo X80 Pro has its own distinct look. The smartphone has been launched in a single Cosmic Black colour. It with a black AG glass back panel that feels matte in your hand, but shines when exposed to light. The smartphone’s ceramic camera module takes up a major chunk of the back panel. The three cameras are placed within the circle on the camera module, while the periscope lens is placed right below the circular area.

The Vivo X80 Pro has a curved front screen with a hole punch display. The smartphone feels very sturdy and well-built in your hands. The quality of materials used also feels premium, and the Vivo X80 Pro is a pretty good looking phone overall. The large camera module is something that may have mixed reactions, but in my opinion it looks good and makes the phone stand out.

The display on the Vivo X80 Pro is the best from the company. You get a 2K AMOLED display with LTPO technology and up to 120Hz refresh rate. Now, the display is as good in real life as it might seem on paper. It is sharp, it is super smooth with the 120Hz refresh rate, and it has ample brightness to be used under bright environments. Gaming on high frame rates or watching YouTube videos at the highest possible resolution is nothing but pleasing on this display. The detail and colour accuracy is also very good, and the Vivo X8- Pro easily falls under one of the best smartphone displays of 2022.

In terms of performance, the Vivo X80 Pro uses a Qualcomm Snapdragon 8 Gen 1 chipset paired with 12GB of RAM. During my brief time with the Vivo X80 Pro, I found the smartphone to be one of the fastest and smoothest Android flagships out there. It easily outperforms several of its competitors in terms of app-loading times. The smartphone does not heat-up one bit, even while playing games. I played several games like Asphalt 9, Battlegrounds Mobile India, Grid Autosport, Call of Duty: Mobile, and more, and it is enough to say that the Vivo X80 Pro’s visuals almost felt straight out of a gaming phone. I experienced no lags or frame drops during my gaming sessions.

Vivo has done several things to keep the smartphone’s performance as un-interrupted as possible. In order to give the CPU more breathing room while performing other tasks, Vivo has put a specific V1+ chip for the camera that performs all the tasks related to the camera. Further, there is enough RAM in the Vivo X80 Pro to take care of all kinds of tasks seamlessly. The system on the smartphone takes up about 4GB of RAM, and there is a RAM expansion technology that will allow you to increase it further by 4GB more.

While there are no issues with the way that Vivo X80 Pro performs, it still carries forward the rather infamous FunTouch OS. The software is the same as every other Vivo smartphone, and there is no difference between this and other Vivo mid-rangers of budget smartphones. FunTouch OS takes away a little bit from the overall flagship and premium experience that the Vivo X80 Pro offers. The amount of permissions is way too many, and there are still a few bloatware apps here and there.

Battery backup on the Vivo X80 Pro is good. The smartphone easily gave me more than 6 hours of screen time on each charge, and in battery saver mode, it can extend the stand-by time by hours. The 80W fast charging is also quick, and the Vivo X80 Pro charged from 0 to 75 percent in just 18 minutes during my charging speed test.

Camera is the most important and well-thought over aspect of Vivo X80 Pro, and it needs to be talked about a lot. With the X80 Pro, Vivo has upped its smartphone camera game to quite an extent. The Vivo X80 Pro comes with a quad rear camera setup that includes a 50-megapixel primary Samsung ISOCELL GNV sensor, a 48-megapixel Sony IMX598 ultra-wide angle shooter, a 12-megapixel portrait lens, and an 8-megapixel periscope camera.

These four lenses are supported by loads and loads of camera features that include gimbal stabilisation, 5x optical zoom, super moon mode, night portrait, cinematic mode, a horizontal line feature, long exposure, and much much more. This, during my usage, felt like the most advanced camera setup on any Android flagship out there in the market. Not only has the company used the hardware from Zeiss to create a kick-ass camera module, Vivo has also used its AI to make that experience all the more fun and easy to use.

The images from the Vivo X80 Pro’s cameras are sharp and accurate in terms of colour. During the day, it is very easy to get the correct shot from this camera module. Just get the framing right, and you will have a good quality image at hand. The smartphone does not struggle in low light as well. In fact, there are several night features that show you just how capable this camera module is. There is a night mode that takes light from whatever source it can to enhance the image, and the results do not look over-processed or scattered. The results are in fact, crisp and show good detail. I took a photo of four planets lined up against the moon using nothing but the night mode on the Vivo X80 Pro and the results were pretty impressive.

For those who like to take pictures of the moon, there is a supermoon mode on the Vivo X80 Pro’s camera that uses the periscope lens to take clear images of the moon using the 60x digital zoom. There is also an astrophotography mode that allows you to take photos for a starry night. For this, however, users need to keep the camera steady for a bit to get the perfect shot.

Coming to regular usage, the portrait mode on the Vivo X80 Pro is probably the best I have used so far. Many times, you struggle to get the perfect portrait shot due to various reasons – the positioning or the lighting might be off. But with the Vivo X80 Pro, it is the easiest – just point and shoot, and the AI will take care of the rest. Almost all the time, the shots are very good in terms of quality as well as focus on the subject. The Vivo app also allows you to adjust the background blur or bokeh effect after you’ve clicked the shot. The night portrait on the Vivo X80 Pro is pretty solid and takes very good images in low light conditions. It does take a while to focus and process the image, but the results in night portrait were fantastic. The portrait mode itself also comes with features and presets like “cinematic” or “natural” that make the images look even better.

Apart from this, there are other features like Zeiss Natural Colour that lets you adjust the exposure while clicking the photos.

For videos also, the Vivo X80 Pro is excellent. The smartphone’s Gimbal stabilisation works superb while walking and shooting, and the smartphone has several other cool features that will enhance your video recording experience.

There is a cinematic mode on the Vivo X80 Pro that is similar to the iPhone 13 series. The cinematic mode has the ability to switch focus and use bokeh effect while recording videos. The stabilisation in cinematic mode is also very impressive, and the quality looks straight out of a DSLR camera. However, there are moments when the AI struggles to focus on the subject, and there is a slight hazy-effect on the edges while the camera tries to switch focus. Regardless, it is a feature that we have only seen on the iPhone 13 series, and it has been implemented very well on the Vivo X80 Pro.

In terms of camera, the Vivo X80 Pro is one of the best smartphones out there. The company has made several efforts in terms of giving us the best possible camera experience. The images are very detailed and do not look overprocessed (something that Vivo cameras have been criticised about in the past). If you are into smartphone photography, you will love the features and hardware the Vivo X80 Pro has to offer.

VERDICT
The Vivo X80 Pro is one of the best Android flagships of 2022. It looks good, feels premium, comes with blazing fast performance, has a brilliant display, and probably one of the best camera on any phone in 2022 so far. I like everything about this smartphone, except the FunTouch OS software, which brings us to our main question – should you spend Rs 79,999 on the Vivo X80 Pro? Yes, since it feels like a proper flagship in all aspects, and is one of the better Android options on the market right now.